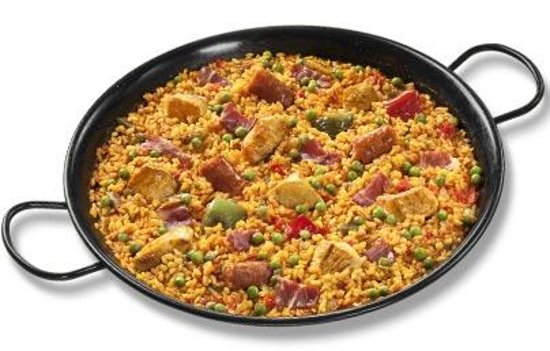 I have had a couple of messages asking me to blog about feeding a big family.
I am a bit of a Ma Larkin when it comes to cooking.
We have an open house policy at home which means quite often we could have 10 + people to cook for including friend and family that pop in.
For this reason I am a big fan of the ‘one pot’ recipe.   It works out cheaper and if anything is left over it can be put in the fridge or freezer for another day.
I am going to try and update the blog with new recipes and ideas every few days at least.
Paella
Paella is one of our family favourites.   I particularly like it this time of year as if the weather is nice there is nothing better than sitting outside with crusty bread,  glass of chilled wine and a bowl of paella.  It’s like being on holiday.
Paella
-I follow the slimming world diet so in this recipe I replace all the oil for fry light or a tiny bit of olive oil.
Apart from the chorizo that makes this diner really low in syns.
-My kids quite like Uncle Bens 10 minute rice (not boil in a bag)  instead of paella rice.
Ingredients
large pinch saffron strands (or cayenne pepper is a cheaper option)
600ml vegetable or chicken stock
3tbsp olive oil
125g (4oz) chorizo, roughly chopped
500g (1lb) boneless, skinless chicken breasts or thighs (or a mix), chopped
1 onion, finely chopped
3 garlic cloves, finely chopped
1 red pepper, de-seeded and chopped
2tsp paprika
250g (8oz) Spanish paella rice
4 medium tomatoes, roughly chopped
75g (3oz) frozen peas
250g (8oz) cooked prawns (with shells on or off) (thawed if frozen) and rinsed
small handful flat-leaf parsley
Method
Stir the saffron strands into the stock and set aside to allow the flavours to infuse while you prepare the rest of the paella.
Heat 1 tablespoon of the oil in a paella pan or a large deep frying pan with a lid. Tip in the chorizo and fry for about 3 minutes until it’s crisp and the spicy red oil has been released. Remove and drain on kitchen towel.
Stir the chopped chicken pieces into the pan and fry over a high heat for about 8 minutes, or until the meat is starting to turn golden around the edges. Transfer the chicken to a bowl and set aside.
Pour another tablespoon of oil into the pan, tip in the chopped onion and garlic and stir-fry for 4-5 minutes, until the onion is softened and just starting to colour. Stir in the pepper and paprika with the remaining tablespoon of oil and stir-fry for a further 1-2 minutes. By now the pan should have lots of brown crispy bits on the bottom, which will all add flavour.
With the heat still quite high, quickly stir in the rice so it gets well coated in the oil, then pour in the infused stock plus 450ml (¾pint) of boiling water, scraping up the sticky brown bits from the bottom of the pan with a wooden spoon. Return the browned chicken pieces to the pan, then add the chopped tomatoes. Cover the pan and cook on a medium heat for 10 minutes, stirring only very occasionally and the chicken is cooked through until no pink is showing. Scatter the peas, prawns and fried chorizo over the top, cover again and leave to cook a further 5 minutes, or until the rice is just cooked and most of the liquid in the pan has been absorbed.
Remove the pan from the heat, put the lid on and leave it to stand for 5 minutes. When ready, give the paella a couple of stirs to lightly mix the ingredients. Season to taste with salt and pepper, scatter over the chopped parsley and serve with lemon wedges if you like.