We have been fortunate to visit a few special attractions around the South of England this Summer.
When I have asked the kids which one stands out, Drusilla’s Park won hands down.

It has been so long since I have been to Drusillas It is nothing more than a vague memory to me.  So when I was asked to give a review of the Park I jumped at the chance.
Anyone that I have spoken to about Drusillas has raved about it, so I was really excited to take the kids.
A friend of mine, Simin, lives in Eastbourne and has an Annual Membership for Drusillas.  She has been visiting the Park for over fifteen years.  So, apart from a great opportunity to meet up with her and her little girl, I thought it would be handy to go with someone who knows the zoo and can give me a guided tour! 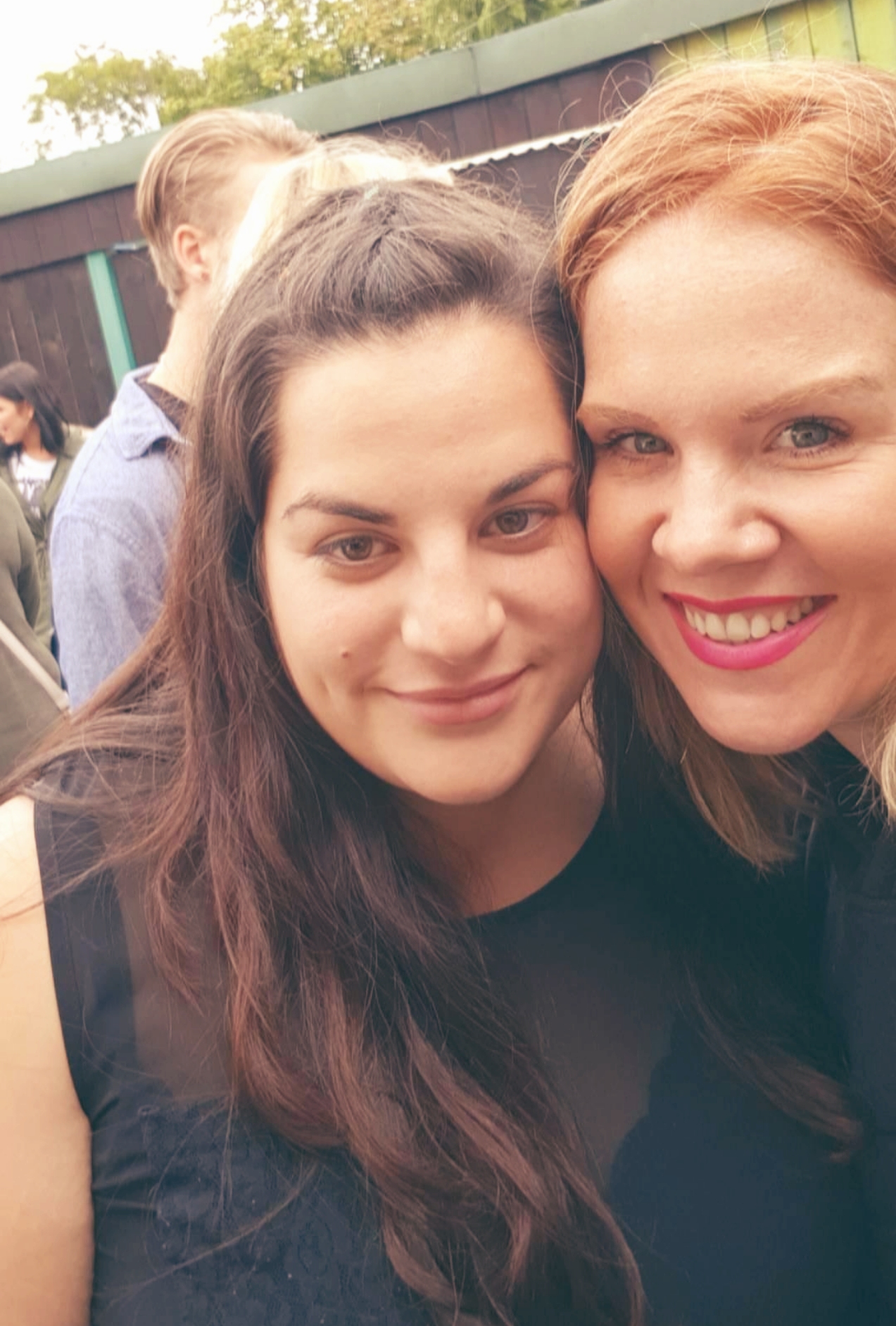 Drusillas Park Is located just off the A27 at Ariston.
From where we live in Warlingham (just outside of Croydon) it took approximately an hour.

The kids usually hate long journeys, but I avoided the motorways and the route took us on a lovely drive through Ashdown Forest.
I had always thought Drusillas was a small zoo.  My kids adore animals and learning about different species so I knew I would be earning brownie points on this day out.  What we actually realised on arrival is that Drusillas is so much more than ‘just a small zoo’.
The variety of play areas and rides are probably the best I have ever seen!  But, I’ll tell you all about that later. 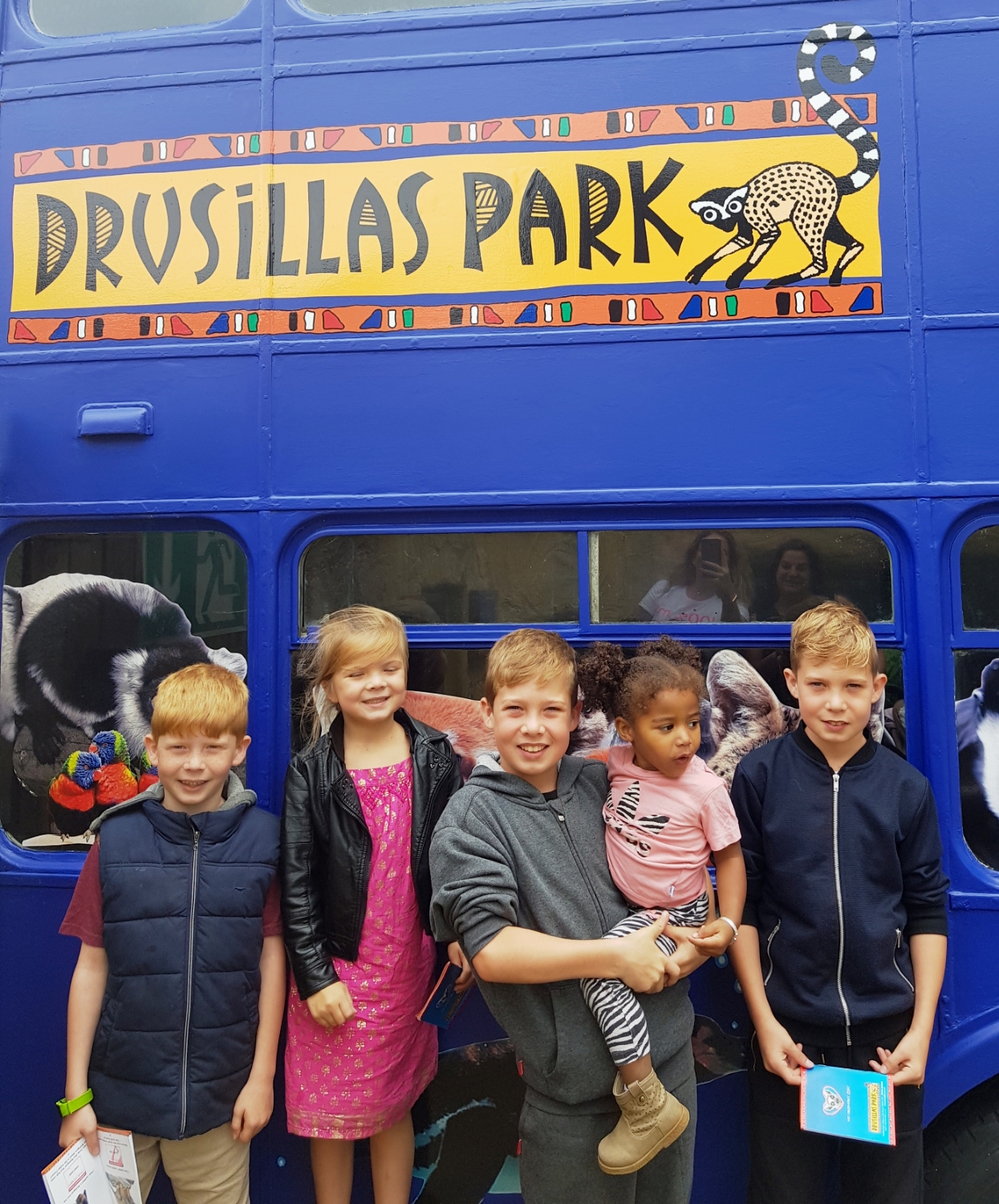 Lets start at the beginning of our day.
Car parking was simple and you don’t get charged to park in it.  This shouldn’t be a surprise, but a few of the attractions we have been to over the last six weeks have charged us for parking.
Like most of my days out, it started with a coffee.  Coffee is my ‘mama fuel’ to help me mentally cope with the day ahead.  Not only to make sure I don’t loose one of my six children, but to make sure I can keep an enthusiastic, ‘Balamory style’ attitude throughout the day.
Imagine my delight when I was greeted with a Starbucks sign!

After my caffeine fix, it was straight onto the animals.
The children had been given some activity booklets to complete on the way around the park.
I thought they were great because they were kept simple.  The kids had to spot animals listed in the booklet and stamp it accordingly.  This meant it was easy for my younger children to complete, whilst keeping the older ones entertained too.
They could also take part in the Zoolympics Challenge.  There were various points around the park where you could test your sporting skills against different animals.
Our first stop was Iguanas and Snakes.  The smell was reminiscent of the twins bedroom, so I was keen to move on fairly swiftly, but the kids took in every fact and bit of information available to them. 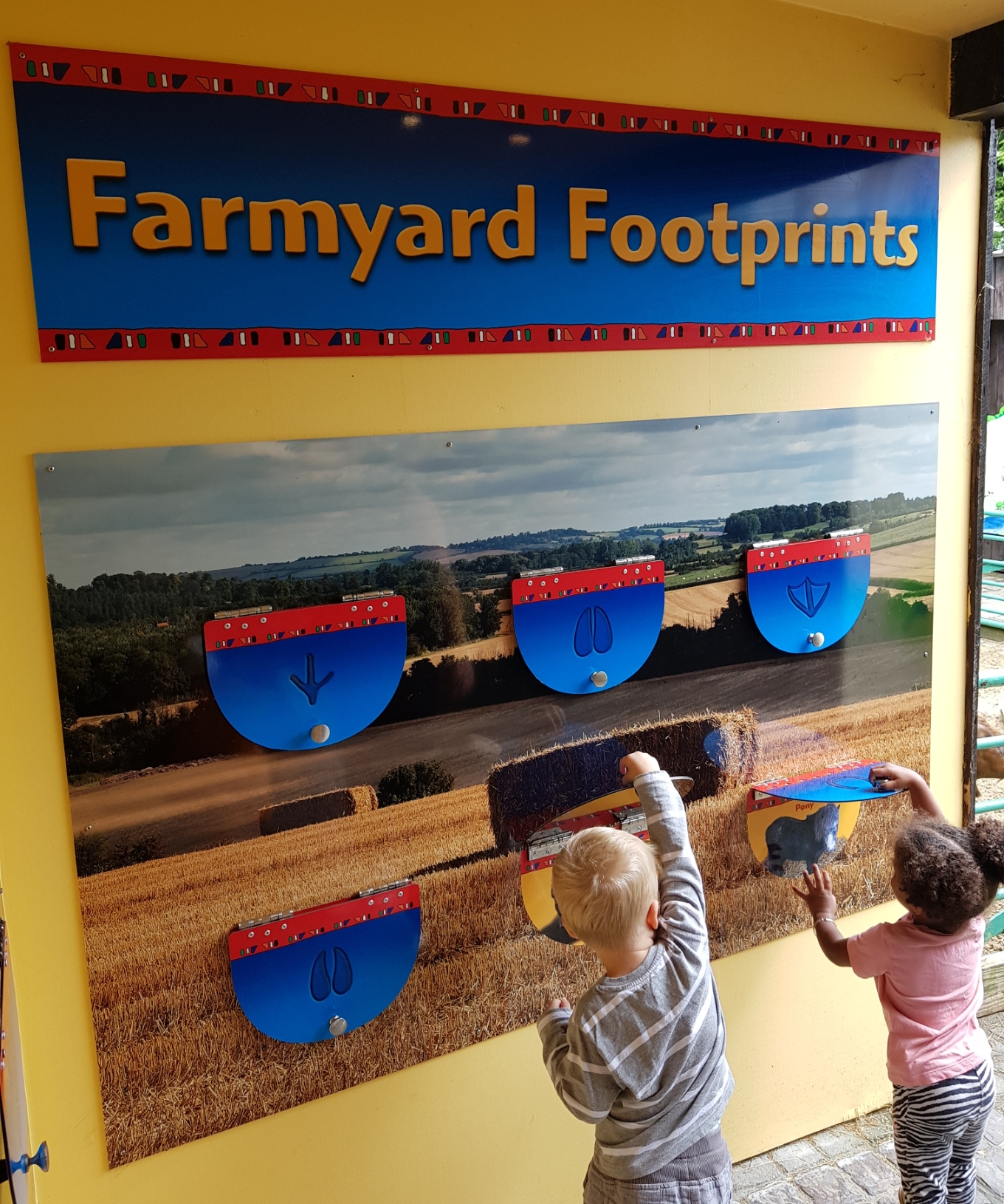 The Farmyard was lovely to mooch around, George loved it and It was so informative.  The older children have been to many farms and have books on most of our animals, yet we all learnt new facts at this section of the park. 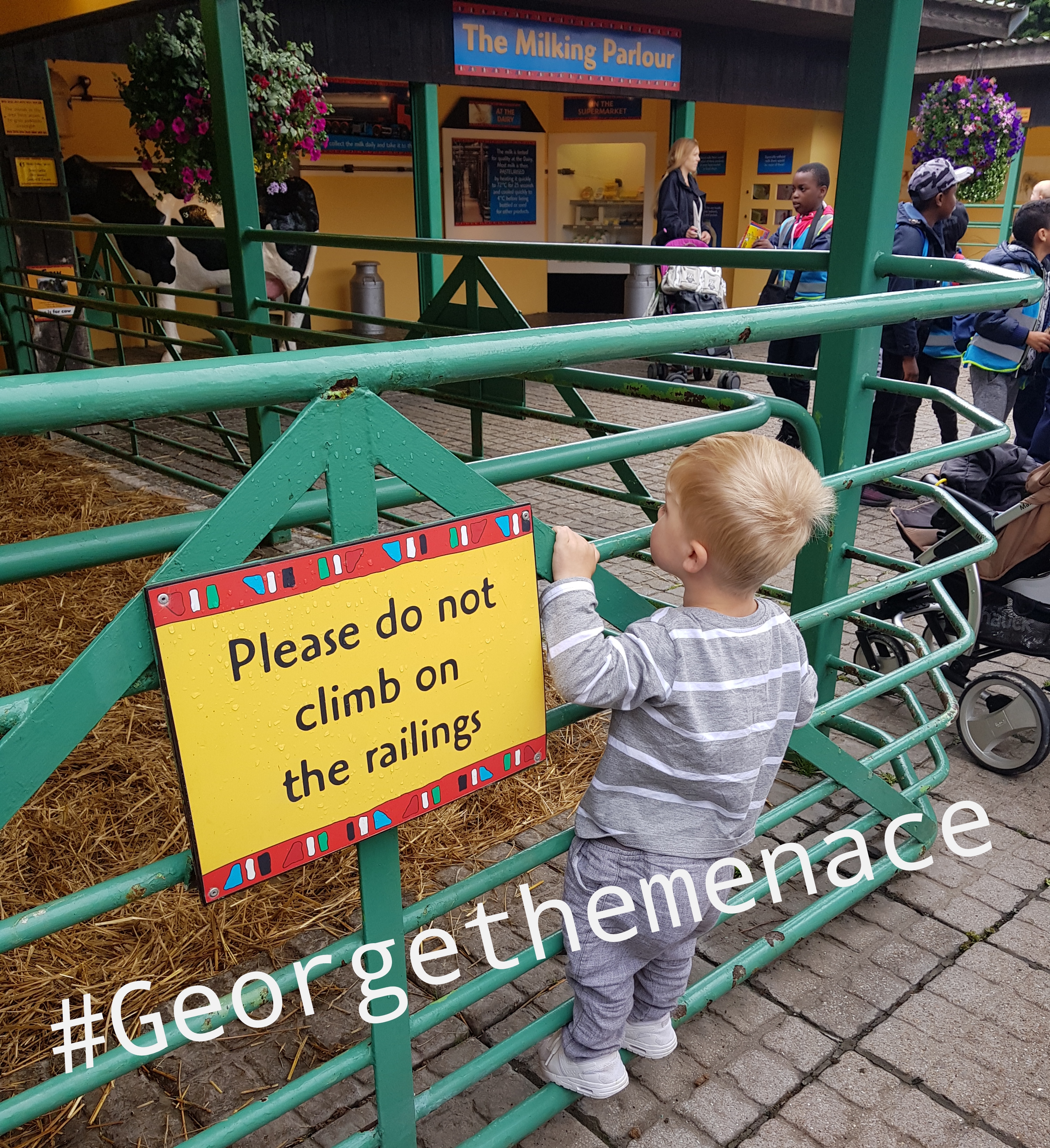 -Did you know that dairy cows produce 21 litres of milk per day?
-Did you know that Donkeys are sometimes kept as pets to keep lawns short? (yea, I suggest swerving that informative can of worms!)
-I also learned that despite how I might feel sometimes, I am not built like a carthorse and, at a push, I just about have the strength of a Serval (a giant cat)….I know!? who knew!? 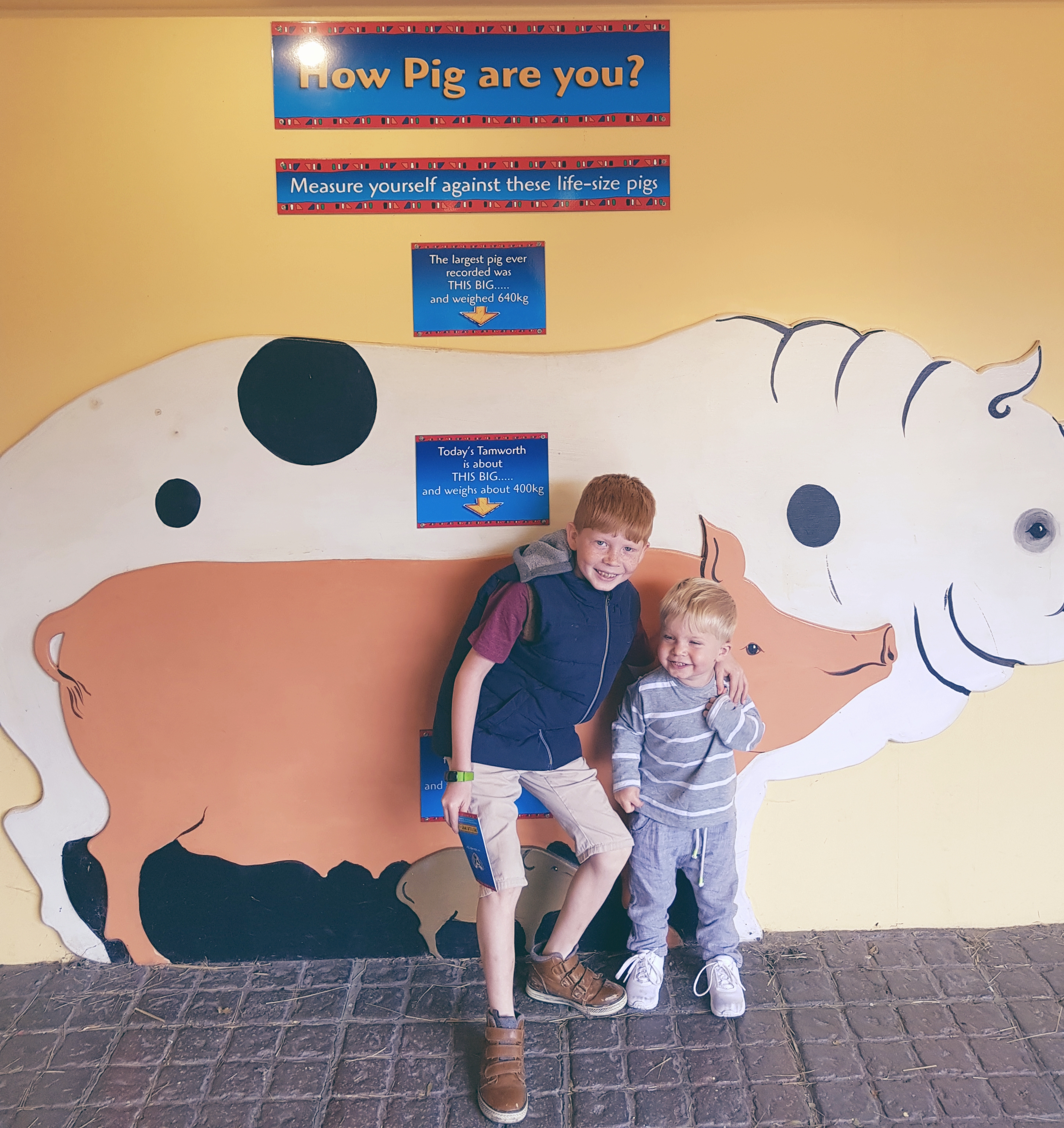 You don’t it about me, but I love monkeys!!! I could watch monkeys all day!! So Imagine my delight when our next stop was the capuchins (Marcel from Friends?) Marmosets, Colobus, Squirrel monkeys and Macaques.   There were even more species of Monkeys dotted around the park. 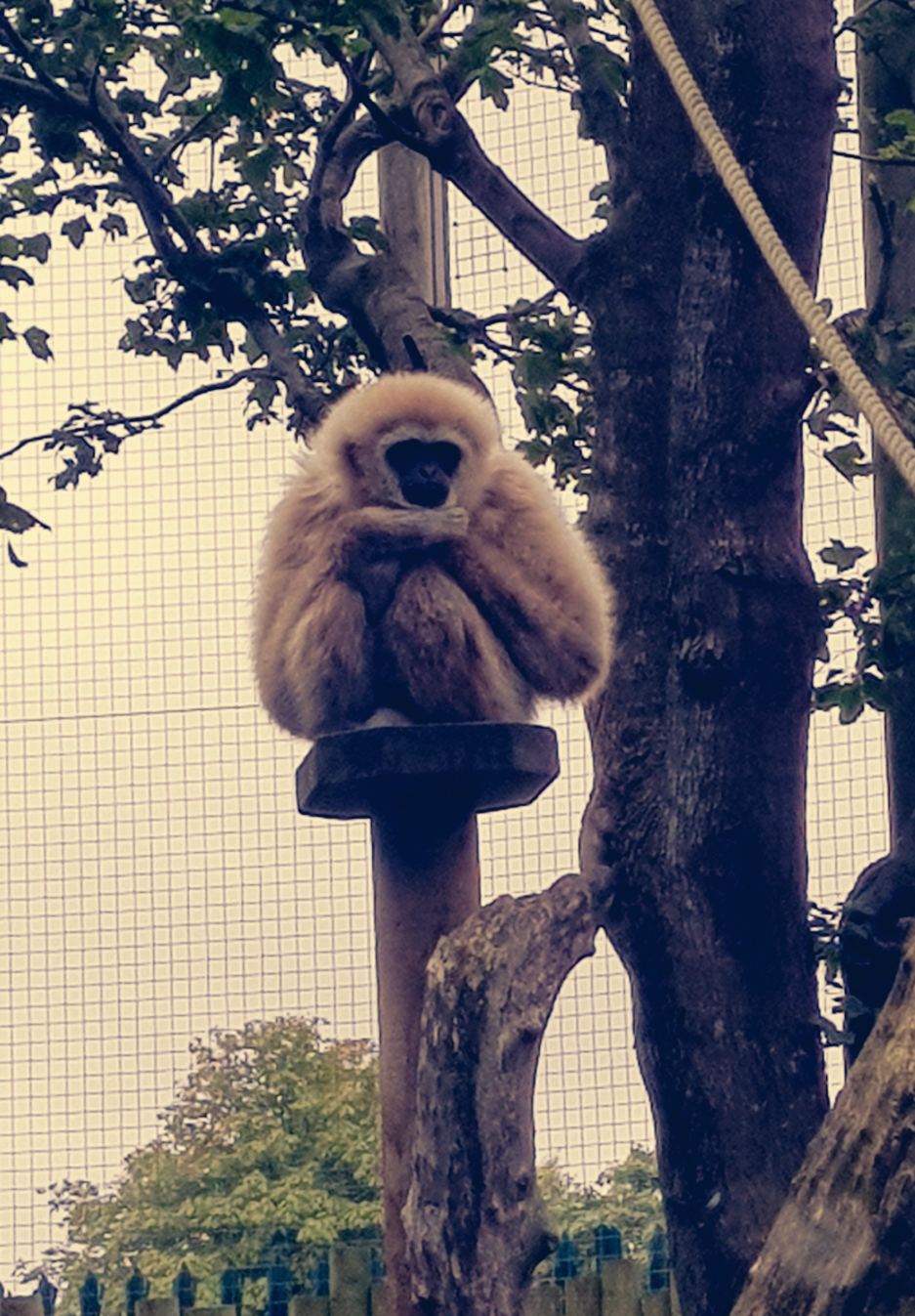 In all the years I have visited farms and zoos, I have never encountered Bats until I visited Drusillas.
The children and I were fascinated.  We could walk through an enclosed area where the bats were hanging (literally) all around us.  I grew up next to woodland and we would see the shadows of bats regularly during the summertime, but it was a completely different experience to see them up close. 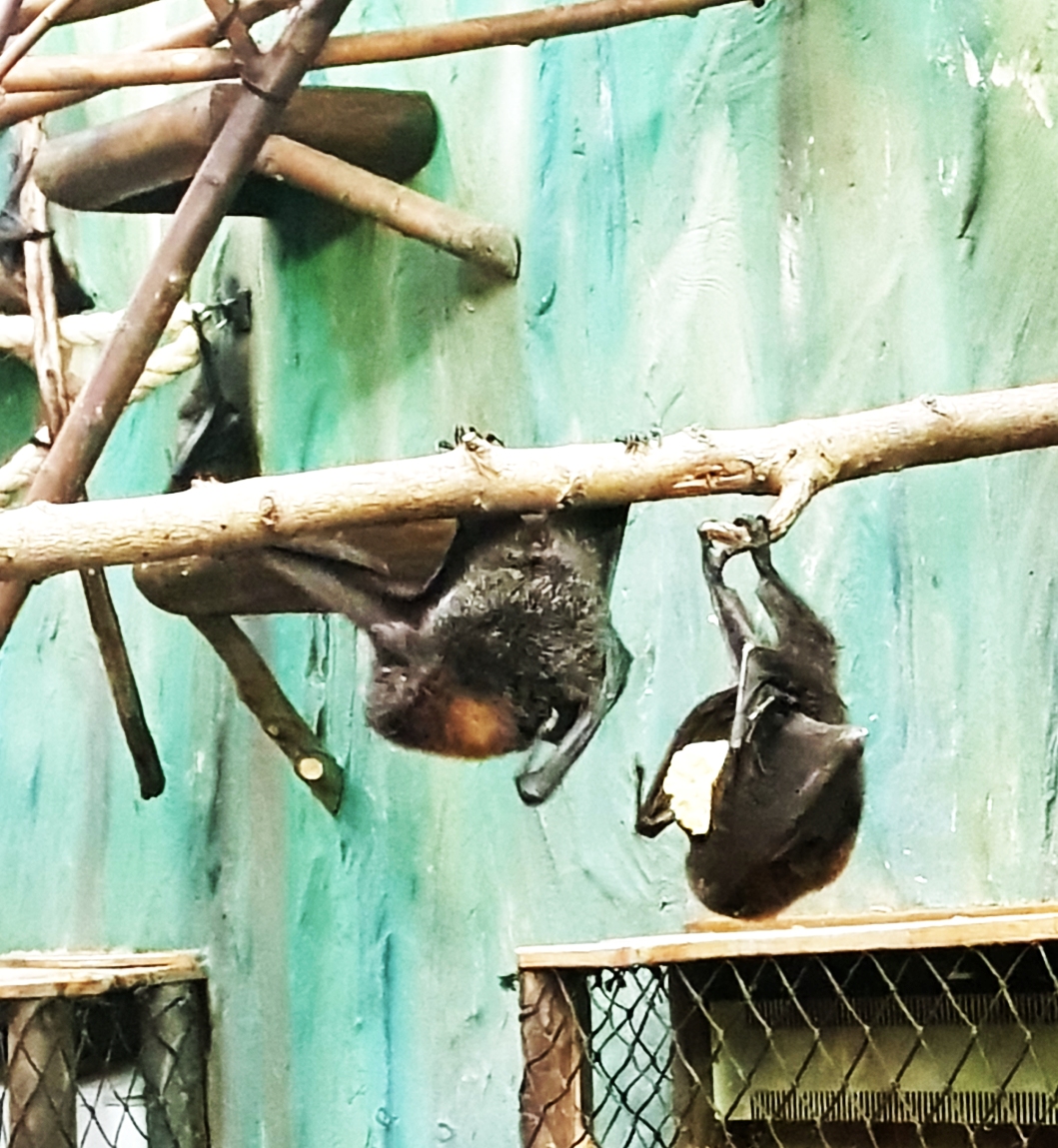 New arrivals at Drusillas this year are the Giant Anteaters, and how amazing are they! (and, FYI, nothing like ALF!)
The park has over one hundred different animal species and I am not going to go through every one, but amongst some of our favourites were Beavers, Porcupines, Sloths, Camels and Penguins. 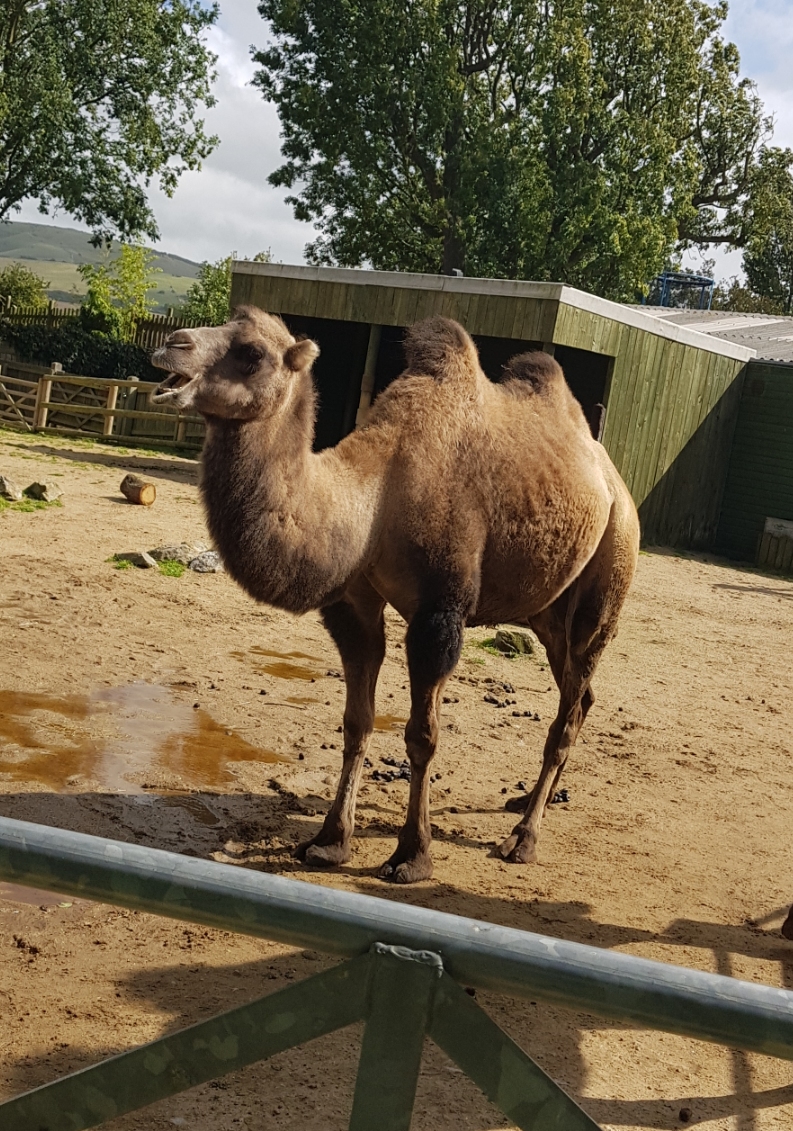 I loved seeing the Flamingos, (and not just so that I could use that cute sticker on Insta Stories!) 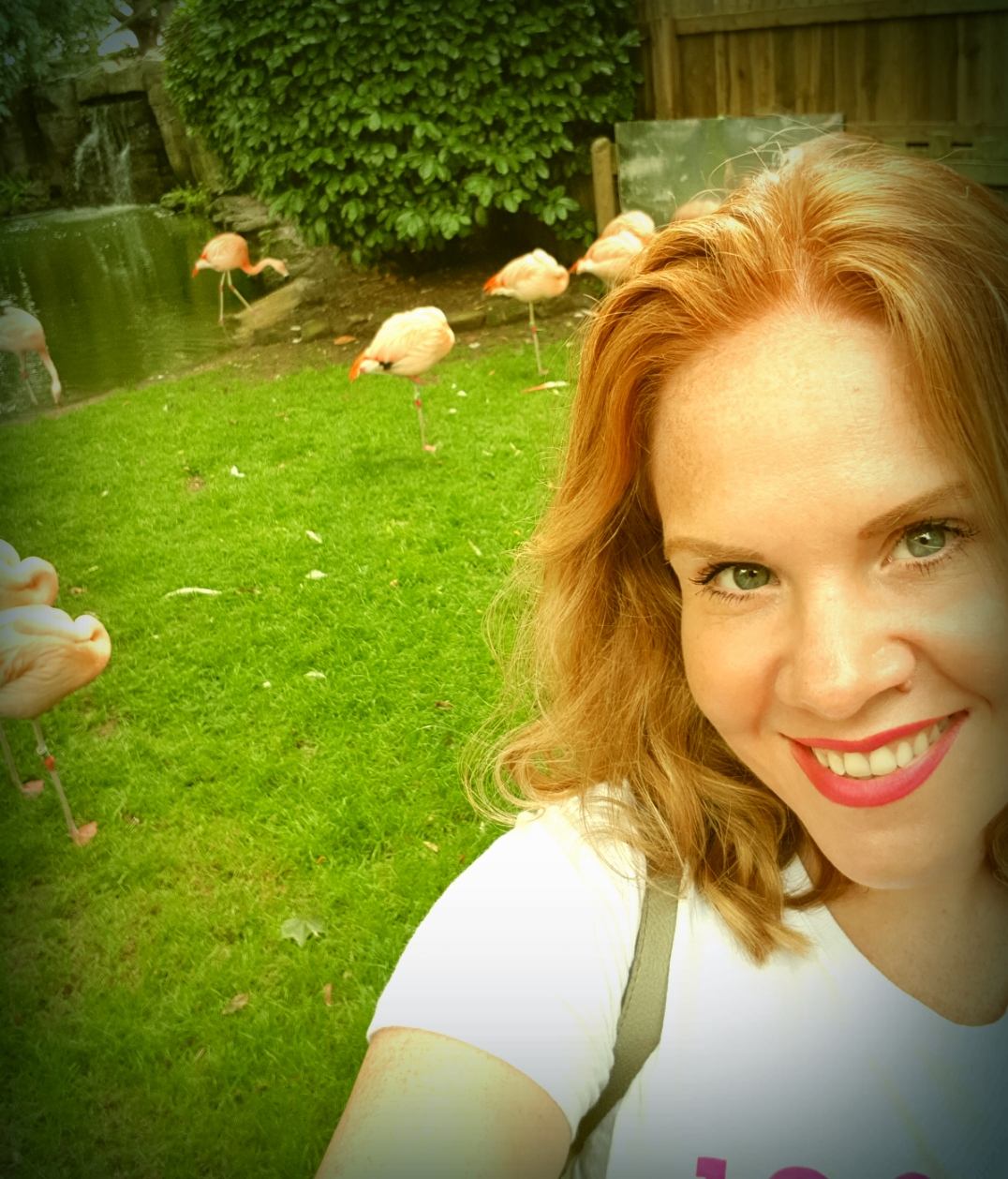 They are so beautiful and pink…. I am working on mike to let me have a flock on the farm….what do you reckon my chances are!?
Another highlight of our day was our walk through Lemurland.  This is an enclosure where you can walk amongst the Lemurs and watch them jump across your path or if you are really lucky, they might even land on you! 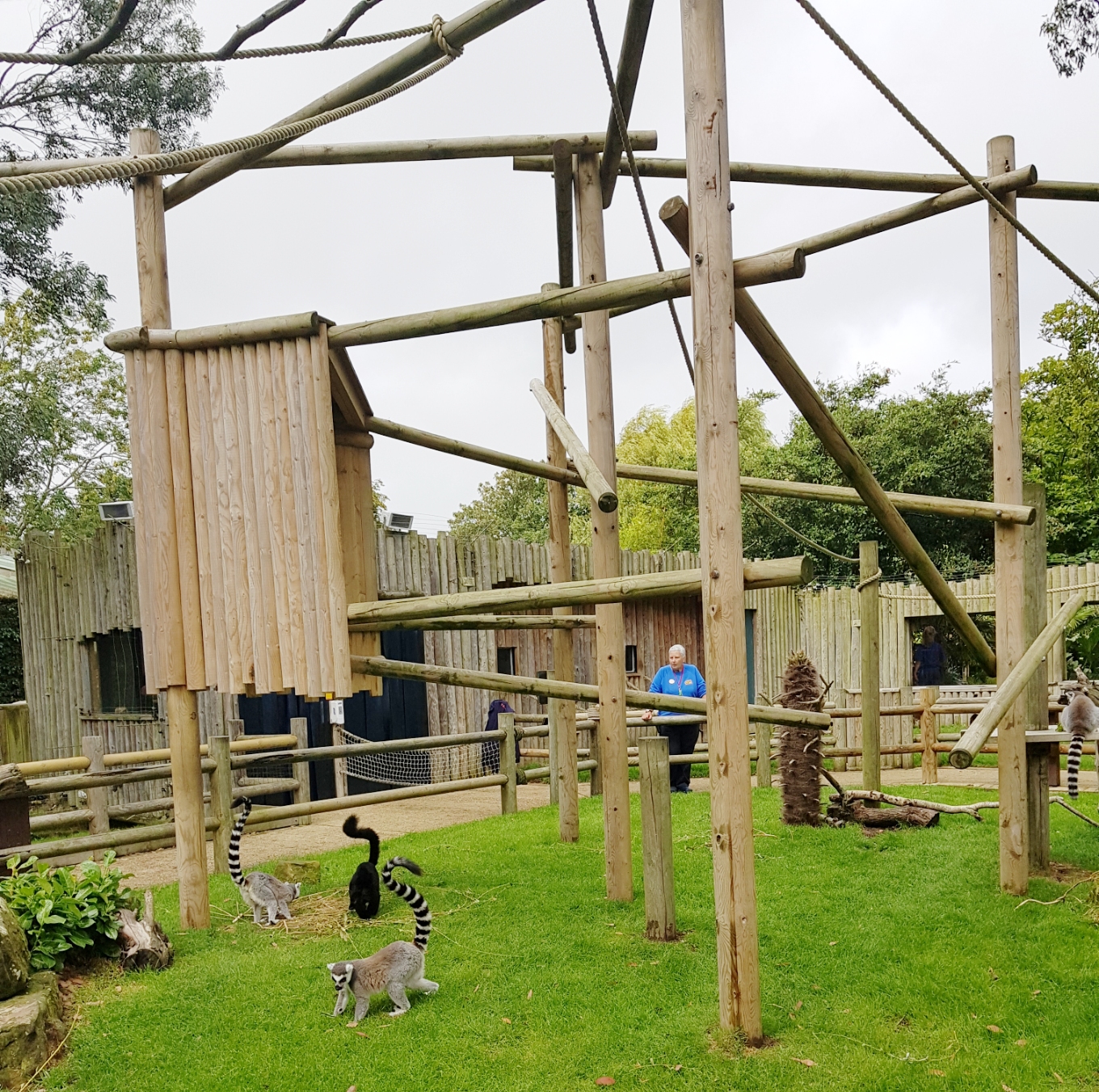 The Go-Wild play area was exactly as it is described…Awesome Play.  It was every child’s dream and with a separate area for younger children, it had something for all ages. 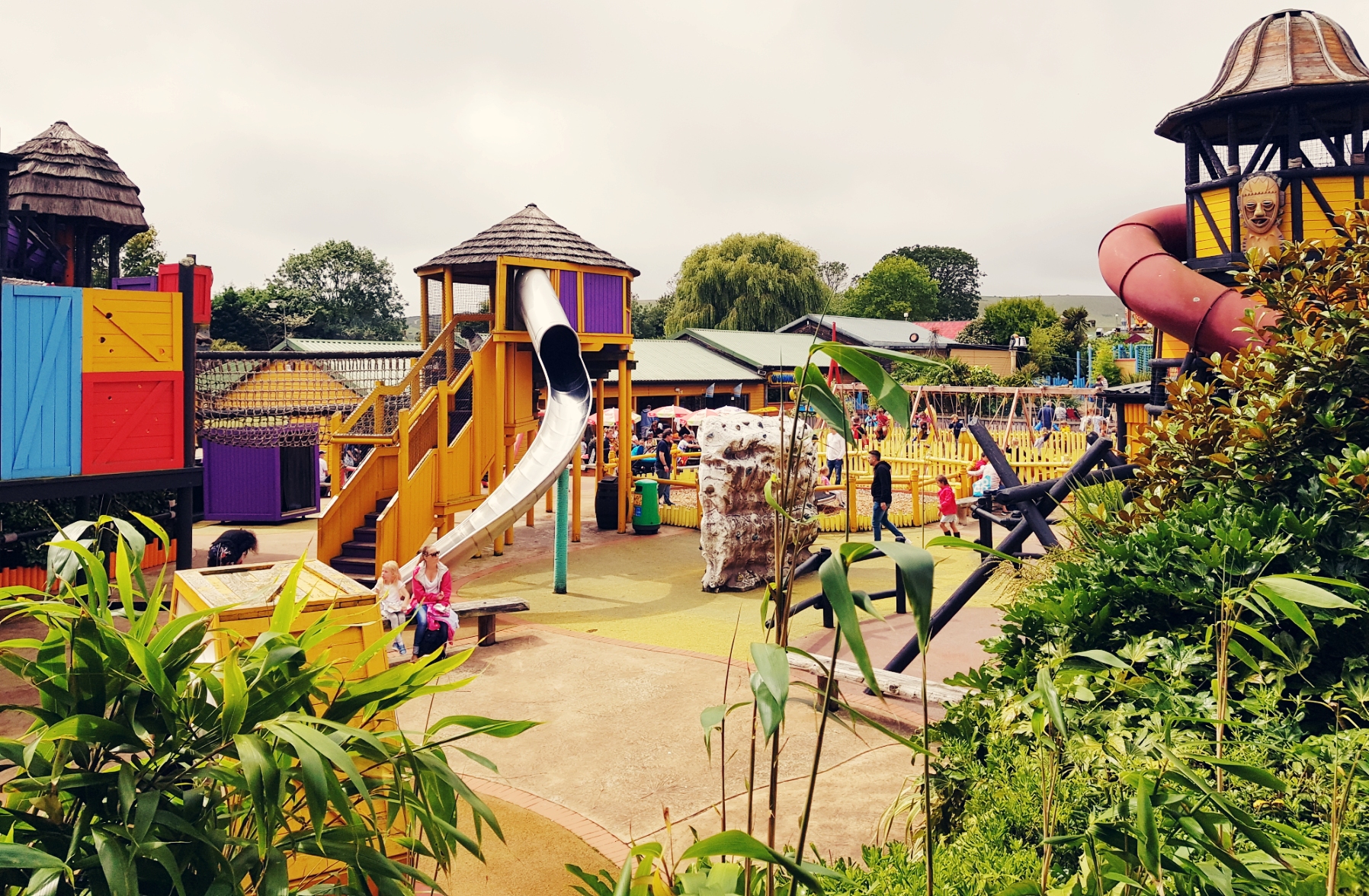 The kids spent over an hour in this part of the park.  If they had their way they would have spent all day there!

The photos don’t do Go-Wild justice.  I couldn’t possibly get a shot with everything included! 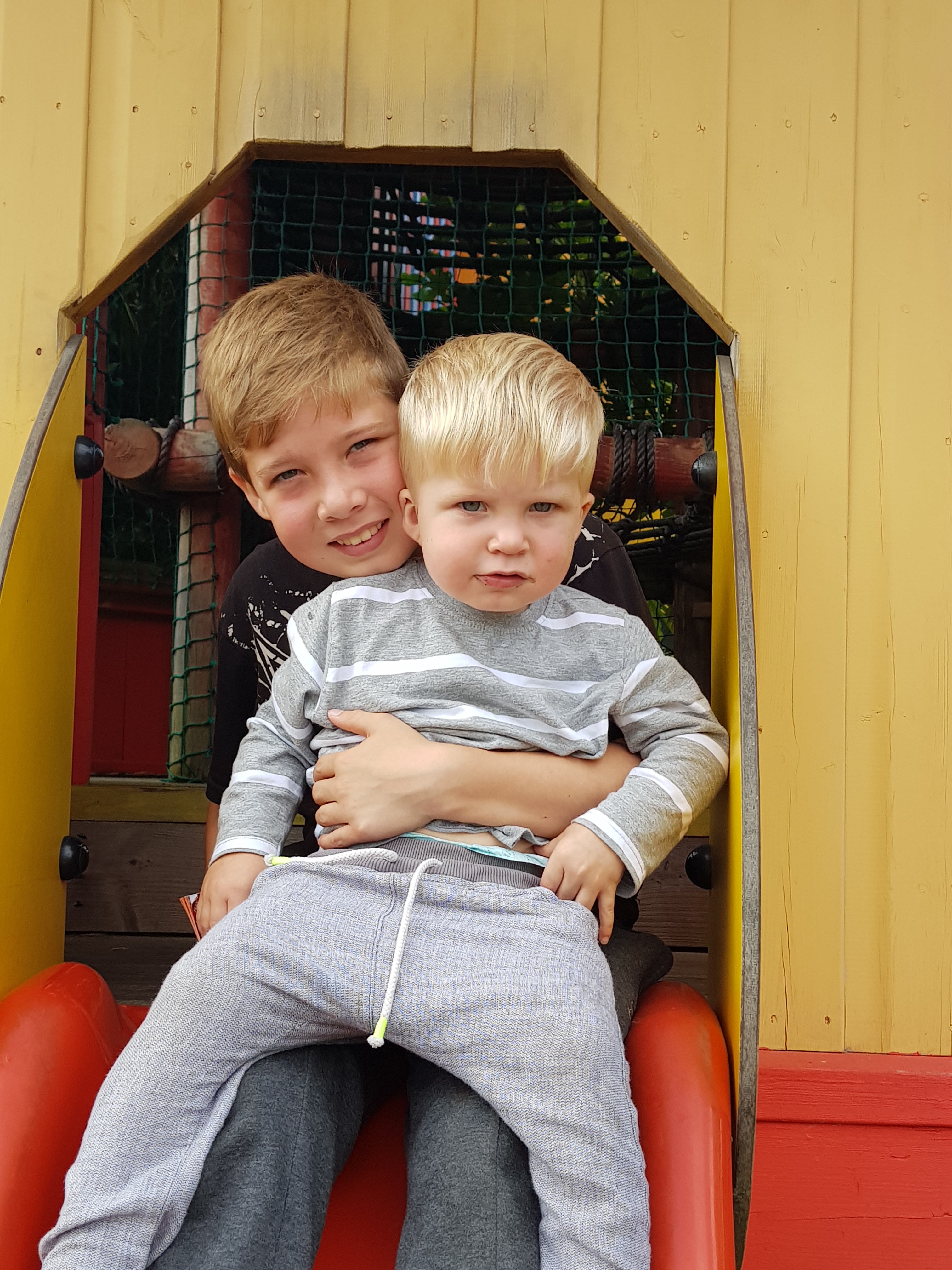 But, there was still so much to see so we had to drag them away from Go-Wild and head for the Get-Wet water park.
Simin had text me the night before to tell me to make sure I brought the kids swimming cosies and towels.  Now I don’t want to appear a whinge, but when you are getting ready to take six children out for the day something has to give.  On this occasion I forgot the swimsuits!
Luckily, it was such a hot day It didn’t stop Libby and George from having a great time jumping in and out of the fountains and water sprays.

Go Safari! is Drusillas new attraction which only opened this year. It is an area of the park made up of three rides.  They provide perfect thrills for younger children (my two and ten year olds enjoyed them). 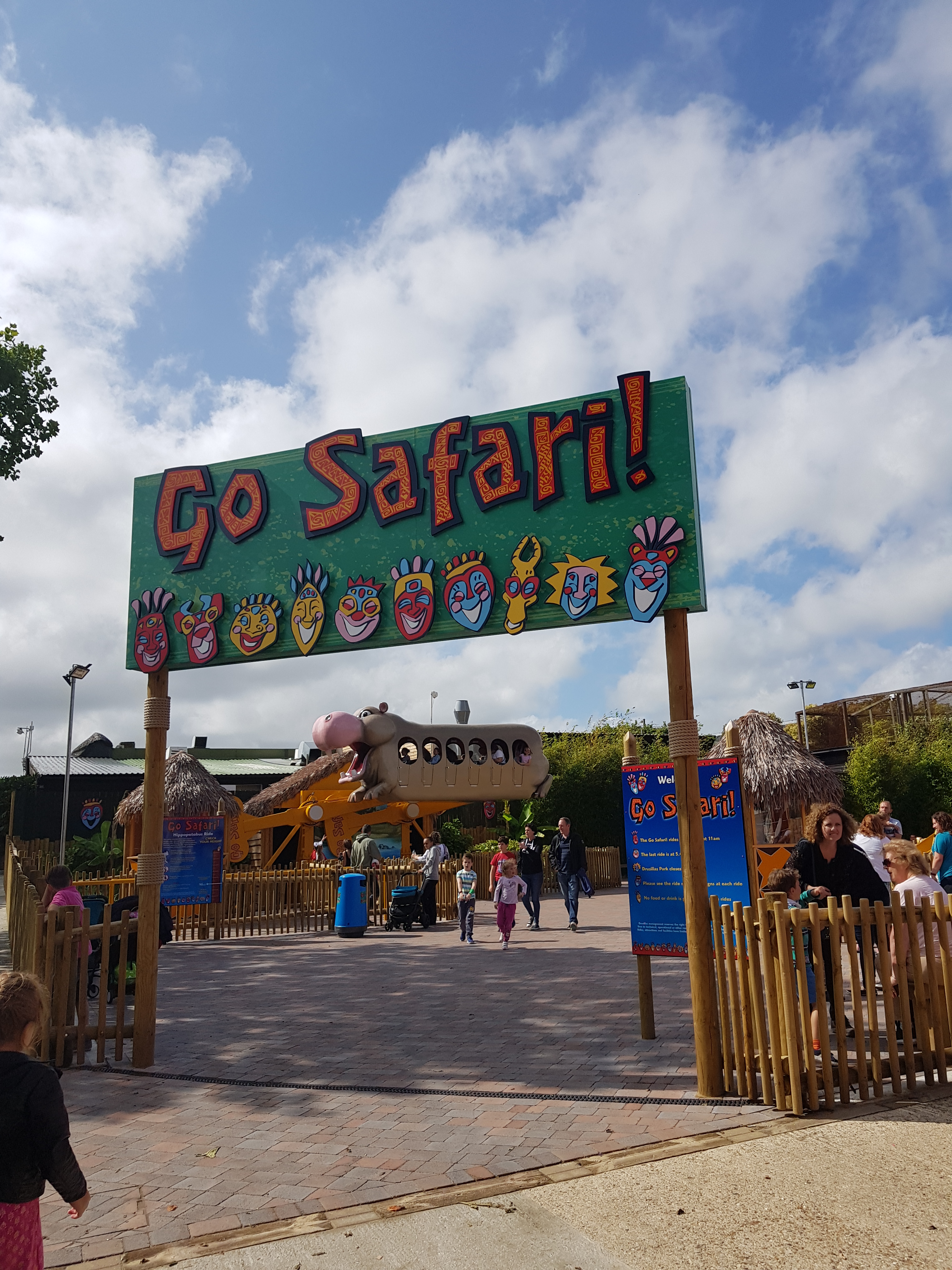 The Hippopotobus, The Flying Cheetahs and The Safari Train which takes you on an adventure around the whole park. 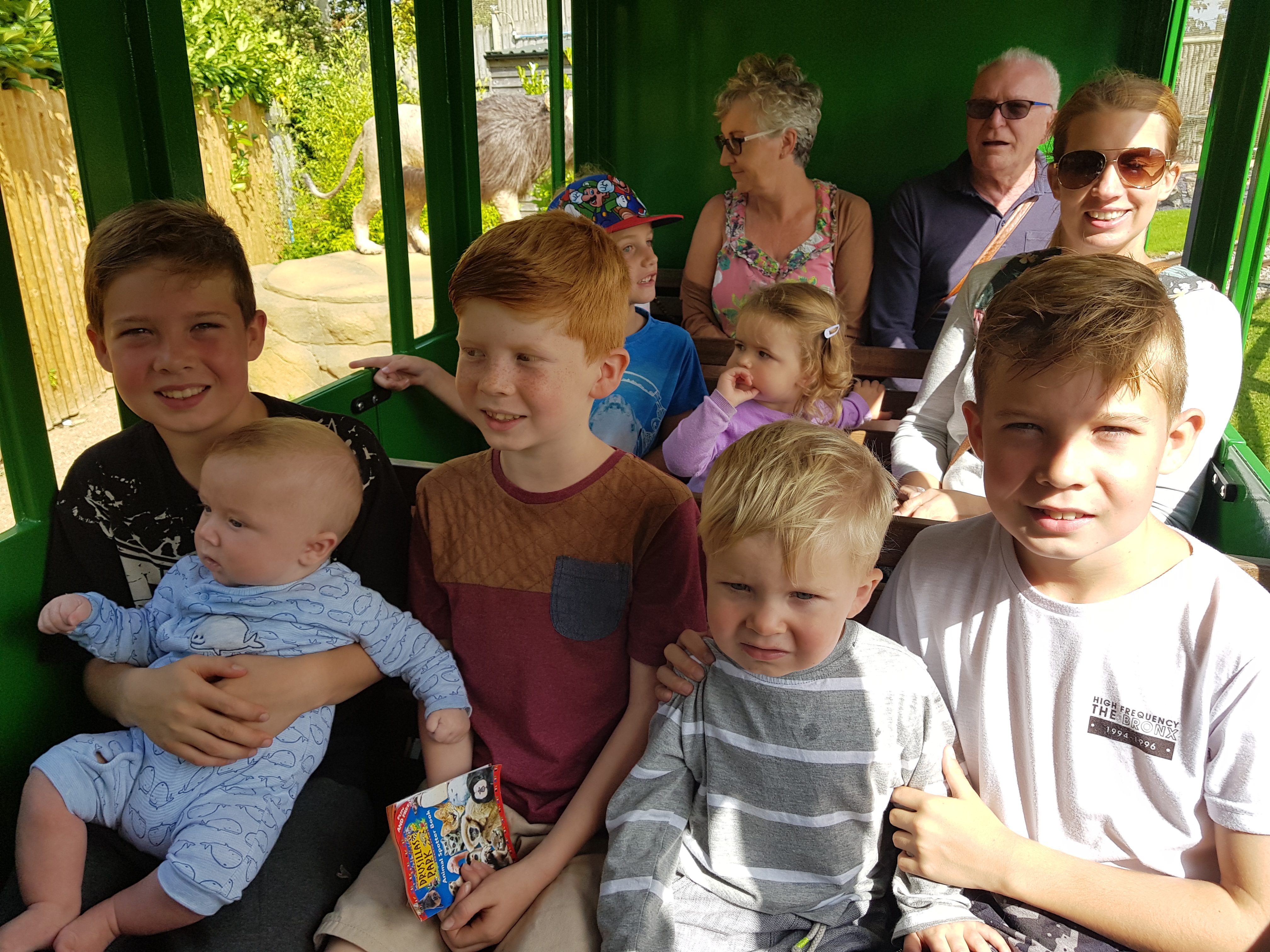 Drusillas has a great Park Maze. We all had great fun getting lost and trying to find our way out.  I kept George safely on my shoulders the entire time we were in there.  Those of you who follow my blog and Instagram will understand why! #Georgethemenace Hello Kitty Secret Garden is a lovely area with three more childrens rides.  The exciting 25ft hooper, a ride where you are bounced up and down.  The tea cups which, need no explanation and the Kitty car ride where you go on a magical journey through Hello Kittys Garden. 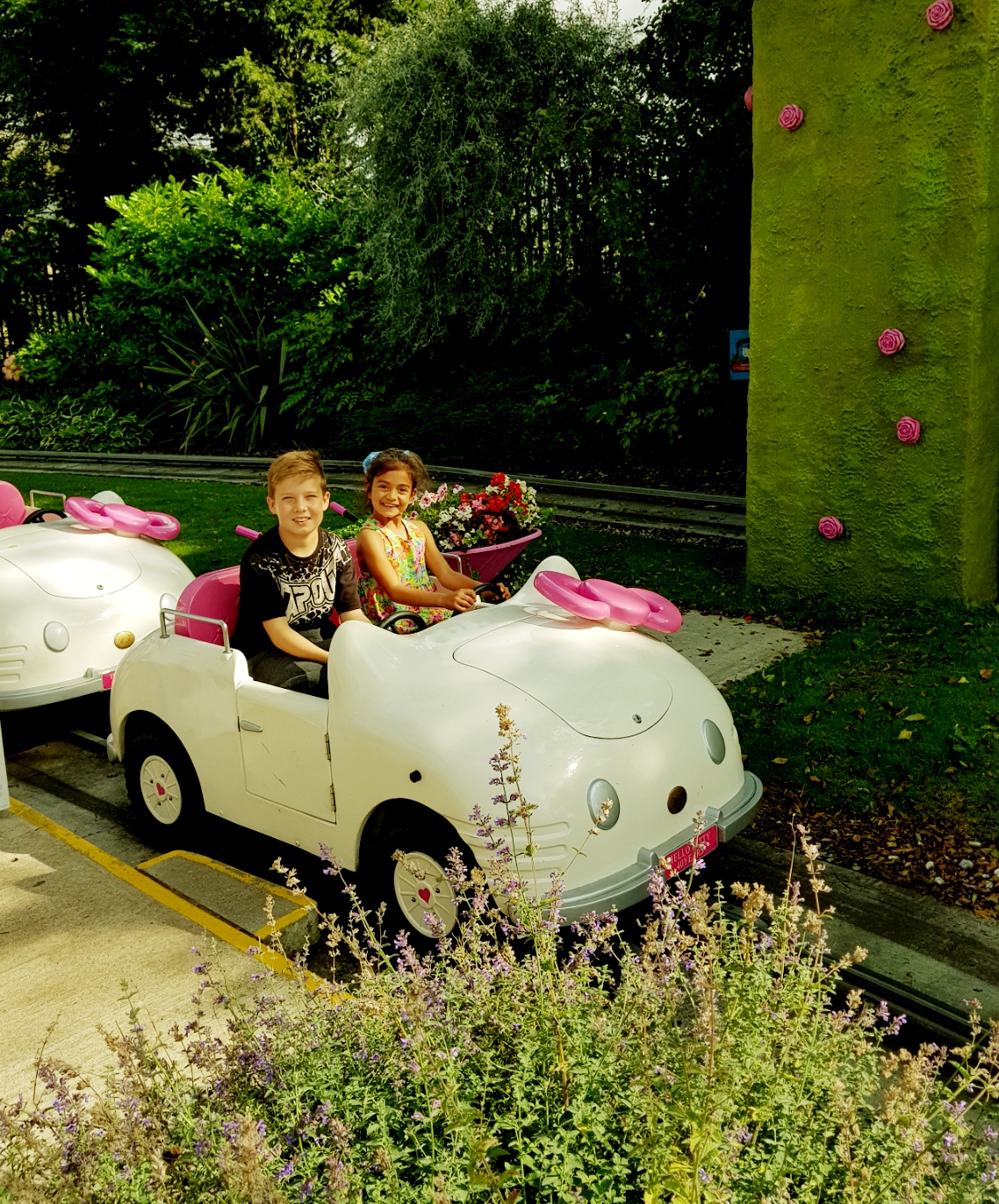 Stop at Hello Kittys House.  The girls met The Puss herself, Hello Kitty, and you can indulge with a pamper at her ‘Parlour’.  Children (or adults if you so wish!) can have their face painted, temporary tattoos and hair braids (at cost). On this occasion I was organised and took a packed lunch with us. Therefore, I can not comment on Drusillas eateries but they all appeared clean and inviting (and the coffee was great😉)
The facilities were good and you were never too far from a toilet (which is always handy with six children!)
Harrison can not go anywhere without playing a shoot-me-up game so he was not dissapointed. And, if we hadnt run out of time they would have liked a go on the climbing wall.
Drusillas have Keeper Talks and Animal feeding at regular times during the day and they have loads of events on throughout the year.  I would definitely recommend heading over to their website
www.drusillas.co.uk We had such a great day!  The weather was glorious, but I can imagine we would have enjoyed it regardless. On our way home from Drusillas, Mikey asked if he could go back and ‘be a keeper for the day’ for his birthday……I am certainly going to look into it. If I have convinced you to take a trip to Alfriston to visit Drusillas, let me know what you think.
And, as always, Please share with your friends and followers 😘
I recieved free entry to Drusillas in return for this post. All of my opinions are completly honest and unbiased.

One thought on “Our Day at Drusillas”